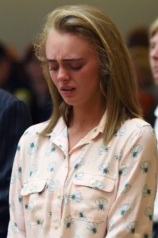 A phone call, rather than texts, played a larger role in the case of Michelle Carter, convicted of involuntary manslaughter in the well-publicized “texting” suicide case, according to an article in the New York Times:

For a case that had played out in thousands of text messages, what made Michelle Carter’s behavior a crime, a judge concluded, came in a single phone call. Just as her friend Conrad Roy III stepped out of the truck he had filled with lethal fumes, Ms. Carter told him over the phone to get back in the cab and then listened to him die without trying to help him.  That command, and Ms. Carter’s failure to help, said Judge Lawrence Moniz of Bristol County Juvenile Court, made her guilty of involuntary manslaughter. ….

To be sure, texting evidence was presented in her trial. Those texts are deplorable and an indication of how technology can be used to trigger horrific consequences.

Here’s a sampling  of Carter texts published by CNN:

Carter: “You’re gonna have to prove me wrong because I just don’t think you really want this. You just keeps pushing it off to another night and say you’ll do it but you never do”
—
Carter: “SEE THAT’S WHAT I MEAN. YOU KEEP PUSHING IT OFF! You just said you were gonna do it tonight and now you’re saying eventually. . . .”
—
Carter: “But I bet you’re gonna be like ‘oh, it didn’t work because I didn’t tape the tube right or something like that’ . . . I bet you’re gonna say an excuse like that”
—
Carter: “Do you have the generator?”
Roy: “not yet lol”
Carter: “WELL WHEN ARE YOU GETTING IT”

American Civil Liberties Union of Massachusetts believes the texting aspect of this case is a chilling expansion of criminal law in Massachusetts, according to the NYT article. Texts, in this case, received worldwide attention because of its prevalence in society. While the phone call may have won the day for the prosecution, the idea that virtual reality as a dual reality is more chilling because it puts defendants in two places at the same time, a violation of physics and defense strategy in any criminal case.

The second edition of Interpersonal Divide goes into depth about  how texts harm children at home and school. There are two chapters devoted to that. However, Interpersonal Divide also analyzes the Internet according to the tenet of there being no “there” there.  That’s a phrase by coined by the writer Gertrude Stein speaking about her childhood home in California no longer existing. She used the phrase about geographical reality, but many social critics revived it to apply to the Internet.

Interpersonal Divide believes the ACLU makes a valid point in asserting that texts used as evidence to incriminate merely because they prod others to commit an illegality is a serious expansion of criminal law. Moreover, the news media apart from the NYT and a few other outlets did not make clear it was the phone call and not the texts that swayed the judge in his decision.

On appeal, it may be argued that texts as evidence should not have been used to the extent the prosecution did in establishing a pattern of guilt leading to conviction of Michelle Carter who also sent other texts like these, which did not attract the same media coverage:

Carter: “But the mental hospital would help you. I know you don’t think it would but I’m telling you, if you give them a chance, they can save your life”
Carter: “Part of me wants you to try something and fail just so you can go get help”
Roy: “It doesn’t help. Trust me”
Carter: “So what are you gonna do then? Keep being all talk and no action and everyday go thru saying how badly you wanna kill yourself? Or are you gonna try to get better?”
Roy: “I can’t get better I already made my decision.”