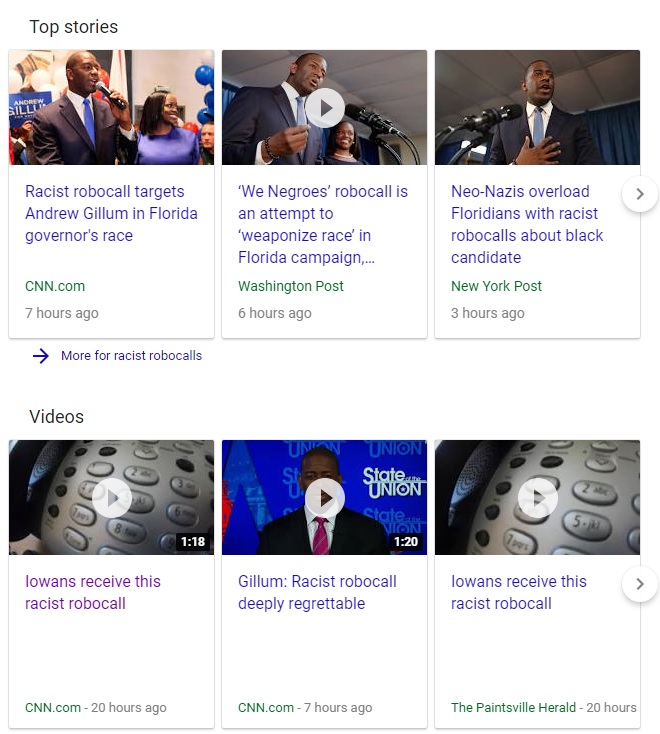 I am the author of two books that foresaw how technology would be used to foment hate–Interpersonal Divide and Living Media Ethics. I am also a professor who teaches media ethics and technology and social change at Iowa State University. In the past, I could share distressing racial content with an appropriate trigger warning. But what to do when the content is so reprehensible that I as their instructor wish I had not viewed and heard it?

Here’s how I decided to handle it:

1. Do not share links. Rather than direct my students to sites containing the vile messages, said to be the work of white supremacists, I provided the above screenshot, which appears when “racist robocalls” is typed into Google (2 September 2018).

2. Do share multiple warnings. I have about two dozen African-American and Latinx students in my classes. Content of these robocalls affects them in a despicable manner. There’s another risk: One of the calls concerns the murder of Mollie Tibbetts, a young woman from our sister school, the University of Iowa. There’s no telling if someone in my classes knows her or her family.

3. Provide summaries. Those who wish to view both stories based solely on the screenshot above will have to voluntarily type “racist robocalls” and hit the links from their own smartphones, tablets or computers. They will have done this voluntarily after being forewarned by their teacher.

For discussion purposes, I summarized verbatim from mainstream media:

An assertion by a white gubernatorial candidate that Florida voters can’t afford to “monkey this up” by voting for his black opponent was widely viewed as a “dog whistle” to rally racists. If it were a dog whistle — and GOP candidate Ron DeSantis denies any racial intent against Democrat Andrew Gillum — then a jungle music-scored robo-call that has circulated in Florida is more akin to a bullhorn–“‘We Negroes’ robocall is an attempt to ‘weaponize race’ in Florida campaign, Gillum warns.” (The Washington Post, 9/2/2018)

An out-of-state white supremacy group has claimed responsibility for disturbing neo-Nazi robocalls using the murder of Mollie Tibbetts to push a violent, racist message in Iowa. Latino leaders said the calls are frightening the community and causing serious anxiety and fear in central Iowa. The 1 1/2-minute robocall begins by talking about Tibbetts’ death, saying she was “stabbed to death by an invader from Mexico. It goes on to call for the deaths of all 58 million Latinos in the United States–“Alarming neo-Nazi robocall hits central Iowa. (KCCI-Des Moines, 9/2/2018)

I feel good about this practice, even though I know my journalism colleagues may disagree, believing I am sanitizing the world. I also know most students may have no problem viewing and hearing the content. (Some might, and those are ones I am concerned about here.)

Educators may understand my method, focusing on the core concept in this exercise: Technology, once touted as our best hope to build inclusive communities, has been weaponized to destroy that idealistic goal.

Media ethics does call for judicious use of hate messages, especially when content emanates from a white supremacy group. You don’t want to promote such groups, even though summaries such as those above do provide a modicum of public exposure.

But good teaching entails understanding how students learn. The point is for both classes to recognize that technology is being used to strike fear in the populace. My lesson plan does not call for igniting everyone’s emotions to such extent that they leave class in fear of or angry about the world.

It is that fear, by the way, that those robocalls intend to trigger. Not so this time.