University of Missouri Athletic Department wanted to promote NCAA’s diversity week but sparked dissent at how African Americans were depicted. Think before you tweet, or suffer a similar fate. 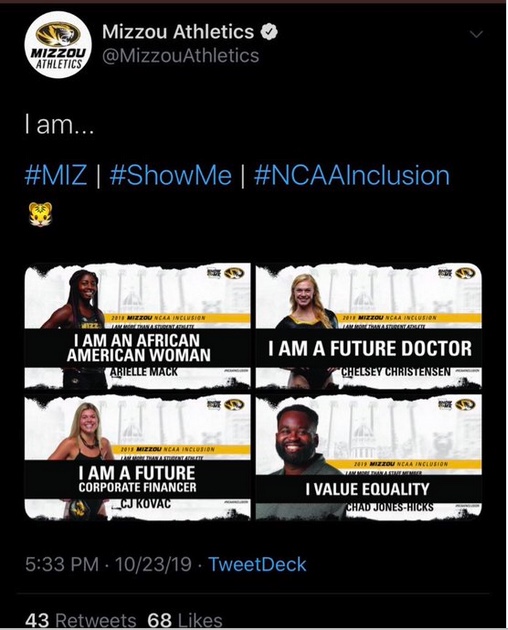 The intent of the tweet was proactive, celebrating diversity by promoting aspirations of athletes. It had the opposite effect.

Included in the photo above were track athlete Arielle Mack, depicted with the slogan “I am an African American woman.” Ticket office employee Chad Jones-Hicks appeared above the statement, “I value equality.” The tagline for white gymnast Chelsey Christensen read “I am a future doctor”; the one for swimmer C.J. Kovac, proclaimed, “I am a future corporate financer (sic).”

The misspelling of “financier” indicates lack of fact-checking. Had someone analyzed each word of the post, perhaps disparities could have been avoided.  To be sure, Mack and Jones-Hicks have aspirations on par with Christensen and Kovac, but instead the emphasis there was on race.

Anything on internet can go viral, undermining intent and tainting an organization’s reputation. Clearly, Mizzou Athletics wanted to celebrate diversity and never meant the post to be demeaning.

Perhaps one errant tagline could be forgiven; but in this case, there were three.

Sprinter Caulin Graves said, “I am a brother, uncle and best of all, I am a leader [emphasis added].” This is how Graves was depicted: 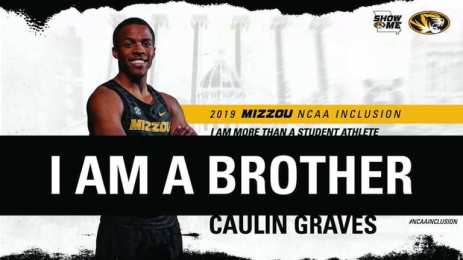 Earlier we made a mistake when we posted a graphic about our student athletes. We apologize. Our intent was to provide personal information about our students, but we failed. We listened and removed the post. This video better represents our intent to celebrate our diversity. pic.twitter.com/dVZjrLZ254

The video, a professional product, has much to commend it. However, the stereotypical tweet undermined that effort.

Vincent Filak, who covered the issue in the Dynamics of Writing website, had these recommendations:

Filak adds, “Even if your newsroom, your PR firm or your ad agency doesn’t have a cornucopia of diversity, you can still avoid dumb mistakes by asking for help.”

Take time with social media posts. Think critically or risk being the target of criticism.